A Feminist Approach to Complementarity (Part I)
Thursday, January 17, 2019
Church 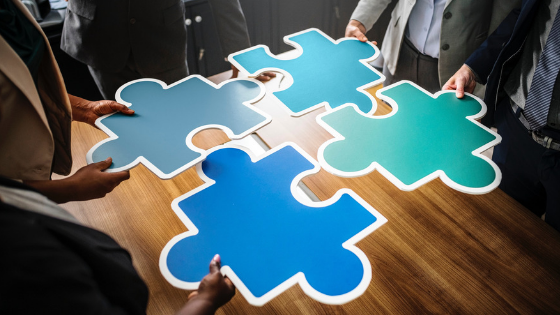 You might have heard a certain buzzword uttered in Catholic circles, particularly regarding gender roles and the Theology of the Body: complementarity.

Personally, I find the idea of complementarity beautiful. The Oxford Dictionary defines it as “[a] relationship or situation in which two or more different things improve or emphasize each other's qualities.” Complementarity not only applies to the differences between male and female, but also to how each individual human person has the capacity to complement every other human being and the whole of the human race.

Complementarity in Scripture and Tradition

The Book of Genesis provides an excellent foundation for how we human beings find our meaning and purpose in relationship with one another:

In the first book of the Bible, we see God decide to create us both, male and female, in His image and likeness. God’s image is not solely male nor female; rather, in our bodies, together, His image is made visible. The importance of this “both” is emphasized throughout the passage: both are needed to complete God’s image, both are invited by God to procreate together, both are given dominion over all of the living things, and it is only after both are created that God says His creation is not only good, but “very good.” All of our bodies, not just in pairs, but in humanity as a whole, provide an image of God.

Let us remember that our God is not a God of mistakes or chance; He chose to create human beings not in one sex, but in two. Neither sex is inferior to the other, in part because both are needed to reflect God’s image pro-creatively (and in so many other equally important ways). Furthermore, God did not just make two human beings, but rather He desires that a whole group of us exist. His image continues to be revealed in each human person that is born through man and woman’s participation in God’s creativity.

[God] chose to create human beings not in one sex, but in two

The poetic mystery of Adam and Eve’s creation speaks to the intimate attention to detail that God exercises with each individual. First, He creates adam (Hebrew for ‘human being’, or translated as ‘man’):

“. . .then the LORD God formed the man out of the dust of the ground and blew into his nostrils the breath of life, and the man became a living being. The LORD God planted a garden in Eden, in the east, and placed there the man whom he had formed.” (Gn 2:7-8)

God took time to form Adam from the dust. Any artist knows that forming something beautiful requires attention, care, and intentionality. After making Adam, God blows the breath of life into him. Now, Adam is not just a being on Earth, but is alive and animated, capable of co-creating and participating in God’s plan. What’s more, God plants a garden and places Adam there, where he has everything he needs. There is order and intentionality to how God made Adam and where God places him. The same is true of us.

There is order and intentionality to how God made Adam and where God places him. The same is true of us.

In His infinite goodness and wisdom, God knows that “[i]t is not good for the man to be alone” (Gn 2:18). And so, God creates another human being, later named Eve, with the same tenderness and care He used in making Adam:

“So the LORD God cast a deep sleep on the man, and while he was asleep, he took out one of his ribs and closed up its place with flesh. The LORD God then built the rib that he had taken from the man into a woman.” (Gn 2:21-22)

God built Eve from the same material as Adam, but fashioned her by different means. Adam and Eve exist from one flesh, are distinct from one another, and are equally loved in the eyes of God. Adam’s exclamation when he meets Eve is a beautiful expression of how we ought to behold God’s image in one another, full of wonder and awe at God’s creation: “This one, at last, is bone of my bones and flesh of my flesh” (Gn 2:23).

We truly are one body, from the beginning of our creation. And yet we are formed distinctly and purposefully by God’s tender hand. We are known and formed in our mother’s womb (Psalm 139) and God’s image on Earth is reflected in us. Every person is needed to fully reflect the Divine Image.

The Creation narrative provides a necessary foundation for understanding human complementarity. While Genesis begins with a story of one man and one woman in their particular relationship to one another in marriage, there is even more to be learned from this story. As we know, God did not just want Adam and Eve, but an entire human people, to exist. Our generativity is a gift from God to allow us to participate in what God has done and could continue to do by Himself. Why give us the ability to procreate if God could just keep making ‘Adams’ out of dust and ‘Eves’ out of ribs? God illustrates His desire for us to be collaborative and interdependent.

Our generativity is a gift from God to allow us to participate in what God has done and could continue to do by Himself.

By remembering that God wanted a people instead of just two persons, we are invited to look beyond a binary way of thinking about the human race. Realistically, people exist along a spectrum of expressions, talents, personalities, identities, and abilities; they are not just one thing or another. There is more to our humanness than our gender, such as the qualities and abilities given to us by God that can together create a fuller human experience. Think about the inventories, and assessments that exist today to help us learn how we complement one another: the Riso-Hudson Enneagram Type Indicator®, Called & Gifted™ Discernment Process, David Merrill’s Social Style Theory, and Myers-Briggs Type Indicator®, just to name a few.

We have countless ways to consider and discuss our differences, but the essential point is that we are called to be collaborative and in relationship with one another.

Unfortunately, the Creation narrative in Genesis can be turned into the backbone of unnecessarily rigid gender roles that reinforce the subjugation of women. People make comments such as, “Woman was only made to be the helpmate of man,” “Man came first, so he’s first in everything,” or “Because Adam did x,y, z, all men are this way, and because Eve did x, y, z, all women are this other way.”

Despite this, we see in Genesis the foundation for how each of us, as a human person, is imbued with unique gifts that are used to build up God’s Kingdom on Earth. Our gifts are complementary in a myriad of contexts, not just in the differences between the sexes, because of how one person’s gifts complement another’s. And even in regards to romantic and sexual pairings, we are each created with a particular set of quirks, weaknesses, and strengths, which can complement whomever we are called to partner with in marriage. Neither men nor women must conform to a certain list of traits in order to complement the entirety of the other sex.

Our gifts are complementary in a myriad of contexts, not just in the differences between the sexes

Thinking about complementarity only in terms of two inflexible, predetermined lists does not allow for the infinite diversity of the individual persons created by God. Gender roles cannot fully encompass how man and woman (both in general and as individuals) complement one another. To focus on these broad gender roles too much (or to reduce complementarity to them) could mean we lose sight of the individual and her unique attributes. We cannot forget the individual and her particular attributes, otherwise we may reduce her to the broad set of traits that characterize the sex to which she belongs.

Keep reading the second and final part of this series.