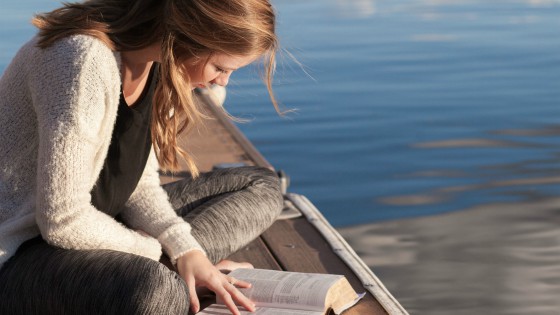 Abigail Rine Favale's spiritual memoir Into the Deep chronicles her conversion to Catholicism from her evangelical Christian upbringing as a child and embrace of postmodern feminism as a young academic. As she moves through these different worlds, she becomes disillusioned with how these traditions fail to fully affirm her dignity as a woman. Her journey into the Church delves into the questions of sin and reconciliation, the significance of the body, the self and relationality, submission and authority, and the mystery of grace at the heart of every conversion. Favale’s account radiates the beauty of an ongoing search for truth and the workings of Providence that allow her to surrender herself fully to God and discover the richness of her femininity.The theme of sacramentality is central to Favale’s understanding of God and herself. She captures the sincerity of her childhood faith but recognizes her “nascent Catholic sensibility” (Favale 5). She harbors doubts about the “Sinner’s Prayer” as a guarantee of salvation and instinctively perceives the need for ongoing, sanctifying grace. As a teenager drifting in her faith, she seeks reconciliation with God through a second baptism, yet she longs for it to mean more than a symbolic gesture of private faith: “I wanted to plunge into the cold waters of that alpine lake and emerge a new creature; I wanted to be overpowered by something stronger than my faltering will” (15). Her hunger for the sacraments eventually draws her into the Church.

Favale’s encounter with the purity culture that reduces a woman’s worth to her sexual history is spiritually damaging. The promise of “once saved, always saved” robs sin of its power to endanger the soul, and yet sexual sin is treated as a different category for women. Favale describes the all-too-familiar, degrading metaphors of chewed-up gum and unwrapped lollipops used to dissuade girls and women from becoming “damaged goods.” Chastity is not taught as an active, lifelong virtue but is reduced to mere virginity.In contrast to this shame-based morality, Favale recalls feeling the presence of Christ in the midst of her sin, gently reminding her that she is made for love. Without the sacramental grace of Confession, however, there is no sense of the necessity of healing and restoration. In feminism, she seeks to escape shame, move beyond sin, and reclaim her integrity.

Without the sacramental grace of Confession, there is no sense of the necessity of healing and restoration.

A Postmodern Feminist Interpretation of the Bible

The question of Biblical interpretation and authority is significant in Favale’s progression from evangelical Christianity to postmodern feminism. In both traditions, she comes to view the self as the highest authority of determining meaning. Without a tradition to guide one’s interpretation of Scripture, the ultimate authority becomes oneself.As a college student, Favale studies Scripture through the lens of feminism, trying to reconcile seemingly misogynistic passages, but then eventually dismisses them altogether. Without a holistic view of Scriptural narrative, it is difficult to make sense of stories like the rape of Tamar that stand silent on the subject of violence toward women. She rejects masculine language for God as a product of the patriarchy, and she prays to God as mother. Favale’s early experience of Christianity pushes her to reconceive of her faith on feminist terms:

When I look back at my birthright evangelicalism, it’s as if the feminine aspects of the faith have been lopped off: there’s no Mary, no genealogy of heroic female saints, no visible Church as our mother, no Mass with its iconography of the bridegroom and bride, no sacramental understanding of our bodies as sacred signs. I rightly sensed that something was amiss in this version of Christianity, that it was too monolithically masculine, that anything feminine was sidelined and relegated. In that religious context, the masculine metaphors, in isolation from their female counterparts, were harsh and unremitting, like banging out a melody using only the lower keys on a piano (122).

The marginalization of women in evangelicalism makes Favale cynical and suspicious toward religious authority. However, she confesses the hollowness of trying to force God into her own image: “In fashioning God according to my desires, I had made him impossible to worship” (46).

The Experience of Motherhood

After years of working as a feminist scholar, Favale becomes a mother. Amidst the physical realities of pregnancy and birth, she is faced with the tensions of her ideology. Her feminism valorized the virtues of autonomy and independence, but the experience of carrying a vulnerable, dependent child reminds her of the interconnectedness of human beings. As EPPC fellow Erika Bachiochi has remarked, “The self-interested economic man is not normative; rather, it is the maternal figure in the mother-child relationship that models human life.”Like many women, Favale fears losing her freedom and identity in motherhood. Yet, she also experiences the paradoxical happiness of giving one’s self in love. Favale sees the self at the center of her feminism: the pursuit of achievement and power. Rather than narrow her sense of self, motherhood enlarges and ennobles it in the service of another.Throughout her memoir, Favale contrasts the image of the untethered self with the surrender of will exemplified in Mary’s fiat at the Annunciation. Mary’s receptivity captures the essence of woman as an icon of humanity. Favale experiences the one-sidedness of submission in fundamentalism and affirms that feminists rightfully reject the concept when it is reduced to an instrument of control by men. Yet, by discarding the idea altogether, she warns, we lose the important truth that all men and women are creatures who must kneel before their Creator. Favale comes to understand that “surrendering of the will does not obliterate it, making us some kind of automaton—no, it sharpens it, heightens it, by redirecting it toward the good, the beautiful, the true” (85).

Mary’s receptivity captures the essence of woman as an icon of humanity.

Favale’s formal conversion to Catholicism is sudden, a response to the prompting of the Holy Spirit. Her interior conversion, however, is slow and arduous. She enters the Church with skepticism toward its teachings and is comfortable with dissenting. Her initial surrender allows her to wrestle these teachings with her heart and mind and to open herself to truths that were unintelligible to her for many years. Her conversion echoes Simon Peter’s:

Christ shows up, invades your small, ordinary world. You somehow choose to trust him, rather than your own assumptions. You obey an unlikely command—Put out into the deep—even though it seems risky, improbable. And then: abundance. Abundance beyond expectation that unmasks the presence of the divine in your midst, and at once you yourself are unmasked, and you fall to your knees, covered by awe, overcome with dismay, and you are changed (70).

Into the Deep is an important work for Christians due to Favale’s rich exposition of the Faith as she articulates the significance of a sacramental vision of reality in which our bodies bear witness to the divine. Her struggle to understand and accept the Church’s teachings is a hopeful reminder that God never fails to satisfy the longings of our minds and hearts.While some may wish that she would reclaim the label of feminist as a Catholic, Favale's work upholds the Church’s ethos of new feminism. She rejects the model of second-wave feminism that glorifies autonomy at the expense of vulnerability, and she recognizes the irony that by devaluing sexual difference, progressive feminists have lost the ability to champion womanhood as a meaningful category. To her surprise, Favale’s lifelong search for the affirmation of her dignity as a woman is fulfilled, at last, in Catholicism.

While some may wish that she would reclaim the label of feminist as a Catholic, her work upholds the Church’s ethos of new feminism.

Vanessa Johnson lives in Houston with her husband and two sons who show her God’s goodness daily. She holds a BA in English and Philosophy and a Master’s in Liberal Arts from the University of St. Thomas. She delights in being in nature, cooking for her family and friends, afternoon tea, and reading books from her ever-growing library.