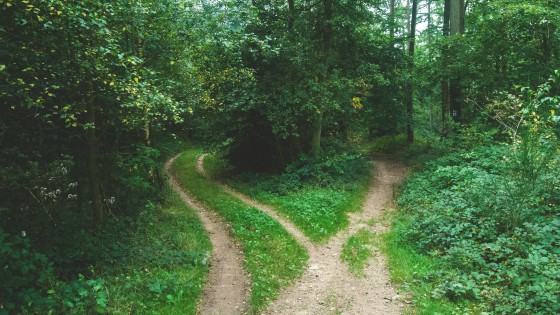 As a member of several Catholic young adult groups in my area, I hear the word “discernment” thrown around often. Sometimes, I shrug it off. Other times, I roll my eyes. Most often, I think “discernment” means that I have to drop everything; break up with my boyfriend; sell all of my possessions; and go on an Eat, Pray, Love-style pilgrimage to find God’s will for my life.

Discernment has become a Catholic buzzword in recent years, but few of us are taught what it is and, perhaps more importantly, what it is not. We’ve heard the talks about how you can’t discern whether to commit murder or cheat on your spouse, because both of these actions are immoral. So, what happens when you’re torn between two or more good, wise, and healthy choices?

During the last few months of 2019, my Catholic book club studied discernment, what various spiritual teachers say about it, and how we can apply these teachings moving forward into a new year and new decade. We read a compilation of Henri Nouwen’s writings on discernment, Discernment: Reading the Signs of Daily Life. The chapter called “Embracing the Practice in Solitude and Community” had the greatest impact on me. As I read it, I felt that Nouwen was shining the light of truth on many myths and false narratives about discernment that had been overtly or subtly pushed on me. Below are five myths that I believed about discernment, how Nouwen’s writings help debunk them, and a reflection on adopting a healthier perspective on discernment.

Myth #1: Discernment is a fixed process that you complete once and never again.

Like many young, unmarried Catholics, my first thought when I hear the word “discernment” is vocational discernment: Am I called to marriage? Should I discern religious life? What about consecrated singlehood? Should I switch career paths?

Before I encountered Nouwen’s writing, I sometimes hoped that once I had definitive answers to those big questions, I could shake off the uncomfortable uncertainty of discernment and start living my life as God intended me to. Once the ink dried on my marriage license or my name was inscribed in a religious order’s registry, my path to heaven would be perfectly clear — or so I thought.

As I read “Embracing the Practice in Solitude and Community,” one sentence in the opening paragraph stopped me in my tracks: “Discernment is faithful living and listening to God’s love and direction so that we can fulfill our individual calling and shared mission” (Nouwen 3). Discernment is not a fixed process; it is a faithful lifestyle, a daily practice of opening oneself to the workings of the Holy Spirit. Discernment is less about seeking a clear-cut answer to a question and more about being faithful to God in the present moment, staying rooted in the Sacraments and Scripture, and accepting each day’s responsibilities as they come.

Discernment is less about seeking a clear-cut answer to a question and more about being faithful to God in the present moment, staying rooted in the Sacraments and Scripture, and accepting each day’s responsibilities as they come.

Myth #2: Discernment is a detached, surface-level choice between two or more options.

Nouwen writes, “Discernment allows us to ‘see through’ the appearance of things to their deeper meaning and come to know the interworkings of God’s love and our unique place in the world” (6). I think so many young Catholics panic when they hear the word “discernment” because we have forgotten that discernment is rooted, first and foremost, in God’s love for us. God is neither a blind, impartial taskmaster handing out orders nor a master manipulator making us jump through endless hoops to discover His will. Above all, He desires us to build a relationship with Him by cultivating a heart of contemplation.

While pros and cons lists can be helpful in discernment (I use them all the time), they only tell half the story. If we don’t begin discernment secure in the knowledge that God is a good Father who wants only the best for His children, we might be tempted to choose what we think is the most impressive or the “holiest” option without thoughtfully considering what our unique path to heaven could be.

Myth #3: Discernment is making a decision on our own and then bringing it to God for His approval.

When I was a senior in high school, I was torn between one college in a major metropolitan area and another in a more rural area. When my English teacher suggested I bring this decision to God in prayer, my first thought was, “God’s too worried about war and poverty and ‘real problems’ to care about where some teenager goes to college.” I thought that I would have to make a decision on my own and bring it to God so He could sign on the dotted line. However, I did take my teacher’s advice, and after a solid hour of solitary prayer, I chose the rural college. I haven’t regretted it since, even now, five years after I graduated.

We might believe that God doesn’t have time to worry about our decisions, but this couldn’t be farther from the truth. God is infinite, and He is just as concerned with the little choices as He is with the infinitely big decisions.

God is infinite, and He is just as concerned with the little choices as He is with the infinitely big decisions.

Myth #4: Discernment is a “fall off your horse” moment.

In the Acts of the Apostles, Saul is on his way to Damascus to arrest any Christians he can find. Suddenly, he sees a light in the sky so blinding that he falls to the ground, and he hears the voice of Jesus saying, “Saul, Saul, why are you persecuting me?” (Acts 9:4) That moment changes the course of Saul’s life forever, and he becomes the great evangelist and New Testament writer Paul.

I often thought that God would reveal His will for my life in a similar way: a blinding light, a chance encounter with my future husband in a random location, a rose from Saint Thérèse, or anything but the slow, quiet process of discernment that most of us experience. I think I secretly hoped this would be how it worked because I was afraid of taking the time to shut out the world and spend silent time in prayer with God: “What if God calls me to a vocation, and I hate it? Better to just ignore God and hope I’m on the right path.”

However, as Nouwen points out, intentional silent prayer with God is the only way to ensure that we are following God’s will for our lives, even if we don’t know the specifics of His will. Nouwen writes:

“The Spirit works deep within us, so deeply that we cannot always identify its presence. The effect of God’s spirit is deeper than our thoughts and emotions … [It] is very important to remain faithful to those times and simply stick to our promise to be with God, even if nothing but our minds, hearts, or bodies wants to be there” (12).

Self-discipline is not my strong point, but during the times when I consistently write in my prayer journal or pray my Rosary on the subway, I feel more at peace in my relationship with God and more confident that He is gently, lovingly leading me to the next stop on my journey.

Myth #5: Discernment is a process that you have to complete all alone.

I consider myself an ambivert who leans more toward the extroverted end of the spectrum, especially when it comes to making decisions. I like to talk out my decision with multiple people to hear their feedback and perspectives. For the longest time, I thought that this method of decision-making was “less holy” than emerging from a silent retreat or an Adoration chapel with the clear answer to the question you were discerning.

However, as Nouwen writes, “While discernment begins in solitude, individual seekers of God always come together in community, for the Spirit gathers all believers into one body for accountability and mutual support. A person honestly seeking to know God’s will and way will choose to be in community” (13).

Having the support of a community is essential to proper discernment. Conversations in a tight-knit, intentional community can provide you with a safety net of support, listening ears, and, most importantly, prayers. Members of a solid Christian community can act as a sort of mirror, reflecting back to you your identity, values, and goals when you become overwhelmed. Listening to different people share their own journeys can shed light on where God may be calling you. Your community can be as large as a book club with 10 members or as small as you and your spiritual director.

Having the support of a community is essential to proper discernment.

It is also important to note that, for vocational discernment to religious life or married life in particular, you are not the only person who needs to discern. For every person discerning religious life, there is a community, order, or seminary that must also discern whether it should bring this person into its community. For every person in a romantic relationship discerning marriage, their partner must discern marriage alongside them. Discernment never happens in a bubble. Jesus tells us, “For where two or three are gathered together in my name, there I am in the midst of them” (Matthew 18:20).

Yes, sometimes discernment can be overwhelming, scary, or paralyzing, but our ultimate goal should not be a clear-cut answer handed down to us from heaven. At its heart, discernment is learning to trust that God is a loving Father who wants the best for His children and then living our lives as a response to that love. It’s not just about making a decision; it’s about building a relationship and taking action in the security of the Father’s love for us.