Getting Real With St. Thérèse 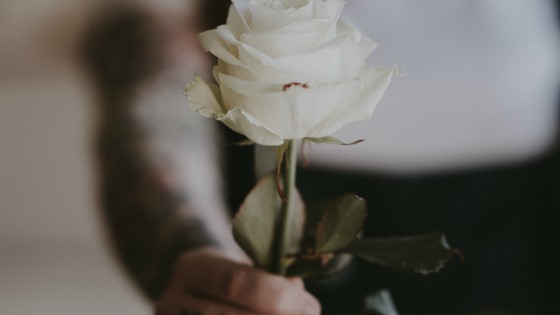 St. Thérèse is one of the most well-known saints in the Catholic Church. She’s famous for her “little way” of holiness, her childlike trust in God, and (of course) her roses.

It seems like most Catholics fall into one of two categories: those who find her talk of flowers and sentimentality off-putting and those who once found her off-putting but are now passionately devoted to her. The latter group will tell you (as I am about to) that, for a long time, they didn’t really get St. Thérèse, but after [insert miraculous story], she is now their favorite saint, best friend, and the namesake of their child.

It seems like most Catholics fall into one of two categories: those who find her talk of flowers and sentimentality off-putting and those who once found her off-putting but are now passionately devoted to her.

Naturally, there was a part of me that wanted to jump on the St. Thérèse bandwagon. When I learned that she also suffered from scrupulosity, I saw a divinely ordained friendship in the making. I wanted to learn all I could about her and read her autobiography, The Story of a Soul.

And I really struggled with it. I found almost nothing relatable in her story as she told it, and I even began to resent her. She mentions struggles, but all I saw were (at worst) inconveniences, and I started to believe that she had no experience of real pain and suffering. She calls herself the greatest of sinners and simultaneously confesses agonizing over things that aren’t even sinful. For someone who was trying to overcome her own scrupulous habits, this was confusing, disheartening, and embittering.

The most difficult part of her story for me was reading her constant praise and gratitude, woven through each sentence. “Everything is grace,” she says, as she seems to gild her most difficult moments in the emotional and sappy language of God’s goodness. While I see now that there is a deeper truth in this language, at the time, it felt like she minimized suffering, as though I had to be emotionally OK with whatever suffering I went through.

For these reasons and more, even thinking about St. Thérèse filled me with bitterness and resentment. She was supposed to be my patron in the fight against scrupulosity. She was supposed to teach me to trust God’s mercy, even in the midst of my fears and terror of God’s justice. I felt disappointment and betrayal as her writing taunted me with the emotional and spiritual perfection that I grasped at, but could never attain.

Two biographies later, I’m finally starting to know Thérèse as I realize that my initial perspective and interpretation of her were incorrect. The fact is, the way she tells her story needs context. These biographies radically changed how I see her, how I relate to her, and how I know her.

The second, The Context of Holiness by Marc Foley, is a spiritual and psychological biography of St. Thérèse of Lisieux, and it’s the biography I want to focus on here. In it, Fr. Marc Foley discusses the mental, spiritual, and physical trials Thérèse suffered throughout her life and interprets them through the lenses of various psychological theories. His point is neither to diminish the spiritual significance of her experiences, nor to explain away her difficulties, but to offer a clear perspective on her manifold struggles. She didn’t become a saint by overcoming all of her trials (mental illness and childhood trauma included). Thérèse’s profound struggles were the context in which she grew in holiness.

She didn’t become a saint by overcoming all of her trials. Thérèse’s profound struggles were the context in which she grew in holiness.

The Little Way is often described as “doing small things with great love.” While that's certainly part of it, the description is incomplete. Thérèse's Little Way is not primarily about doing things at all. Rather, it is about trust: a radical trust in God, our loving and merciful Father who delights in His children. It’s about trusting that God’s love and faithfulness remain, even when we feel surrounded and filled with darkness.

Reading The Context of Holiness taught me that:

Contrary to the impression I had gleaned from reading her autobiography, she struggled emotionally, mentally, and spiritually (not to mention physically) up until her death. Her famous “Christmas conversion” was one of many graces she received, but it didn’t mark the end of her sufferings.

2. What a person says out loud (or writes down for posterity) isn’t the whole picture.

I had often judged Thérèse based on a shallow understanding of her writing and on my own wounds and biases. With the context of her family background, details about childhood events, and people she encountered in her lifetime, I have a fuller perspective on her life and what her holiness really consisted of.

3. Therese was not immune to the cultural climate of her day.

A century before Thérèse's lifetime, France underwent a bloody revolution and a major cultural, religious, and philosophical shift as a nation. In Thérèse's day, there were two opposing extremes of thought: You could reject monarchism, reject God entirely, and give in to despair, skepticism, and atheism; or you could accept the Catholic faith (often poisoned by Jansenist influences), accept the monarchy, and abandon all questions and doubts pertaining to either. Thérèse was a faithful Catholic who struggled with doubts and despair (as do all human beings). This meant that she didn’t fit easily into either the secular or the Catholic realm of her time.

4. God’s mercy sometimes does permit illness and spectacular failure and doesn’t permit us to overcome our struggles in this life.

Holiness is found not necessarily in achieving perfect virtue but in our attempts to keep going, to keep trying, and to hold onto Jesus.

I share all of these thoughts in the hope that they bring you hope. If you, like St. Thérèse, experience deep suffering (be it mental, emotional, physical, or spiritual), know that you are not alone and that there are resources to help you. Those wounds and challenges are not an obstacle to your holiness: They are where God wants to meet you and make you a saint.

Thérèse didn’t find complete healing in this life — at least not permanently, and not for all of her struggles. As the saying goes, nevertheless, she persisted. Even when she felt despair and darkness, she chose to believe that God is greater.

Holiness is found not necessarily in achieving perfect virtue but in our attempts to keep going, to keep trying, and to hold onto Jesus.

By
Kelly Garrison
No items found.