How a Feminist Poem Changed the Way I Understand Advent
Saturday, December 16, 2017
Church

How a Feminist Poem Changed the Way I Understand Advent 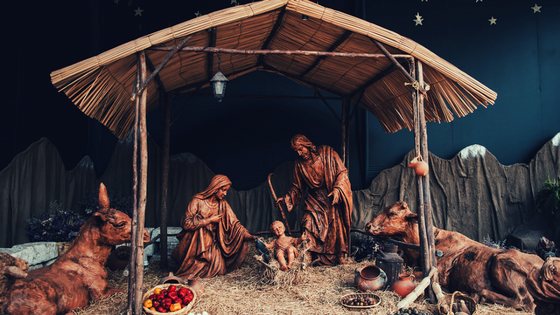 This is a post about Advent, about Mary, and about how the beauty of language can change what we think we know.

But before I get into it, there are few things you need to know about me:

1) I'm an English professor, and for most of my college and professional life, I kept that pretty separate from my faith life. It’s not that I thought my career and my faith were inconsistent with each other – just that there didn’t seem to be much overlap. I remember a conversation I had with a friend who is a theology professor in which I expressed jealousy that his work with students could potentially aid in their salvation. I feared that there was a lack of significance in my own work.

As I grew more in both my faith and my career, however, I started to see overlap. I began to notice how great literature, even literature that is not explicitly religious, almost always contains aspects of truth, beauty, and goodness, and I started to notice the prevalence of stories of redemption and grace, even in the work of authors who seemed anti-religious in their work. I started to think about how the beauty of art can’t help but lead us to God.

the beauty of art can’t help but lead us to God.

I've had a less-than-enthusiastic relationship with Mary for most of my faith life. For a long, long time, I just couldn’t get into the passive, meek, mild woman I understood her to be. I couldn’t get excited about the rosary and couldn’t get past my sense that only old, conservative, traditional Catholics could connect with her.

3) I'm kind of an Advent junkie. Whenever people ask me what my favorite season or holiday is, I say something nice and expected, like Autumn or Easter or Thanksgiving. But, secretly, it’s Advent all the way. I love the quiet expectation, the stepping back, the way the dimmer lights and quieter music reflect the shorter days and hibernation of winter. I love the wreath and the candles and “O come, O come, Emmanuel.”

These three parts all came together for me when I first read a poem by American poet Denise Levertov called “Annunciation,” which reimagines and reflects on the moment when the angel Gabriel appeared to Mary and explained that she would be the mother of Jesus. “Annunciation” beautifully and powerfully unites the beauty of language, the power of free will and consent, and the mystery of Advent. I hope that you will read “Annunciation” yourself; although I’ve tried to describe the imagery of it here,  it’s a poem that needs to seen, heard, and read. Truly beautiful works are like that - they need to be encountered.

Levertov’s poem starts with a scene that we all know. Here’s how the Gospel of Luke describes the annunciation:

And the angel said to her in reply, “The holy Spirit will come upon you, and the power of the Most High will overshadow you. Therefore the child to be born will be called holy, the Son of God.  And behold, Elizabeth, your relative, has also conceived a son in her old age, and this is the sixth month for her who was called barren; for nothing will be impossible for God.” Mary said, “Behold, I am the handmaid of the Lord. May it be done to me according to your word.” Then the angel departed from her. (Luke 1:35-38)

For most Christians, this excerpt from Luke is so familiar that it’s almost invisible, and part of the brilliance of Levertov’s poem is how she takes a familiar story and forces the reader to look at it in a new way. She begins by highlighting the familiar scene of the angel’s visit, but she acknowledges the extra-biblical nature of how most people imagine the scene by describing the details that we all accept as part of the scene, despite the fact that they’re not mentioned in Luke’s Gospel: the lectern, the lily, even the angel, who, while obviously in Luke’s narrative, is not physically described. Levertov’s point seems to be that our perspective of Mary is worth reconsidering because of the extent to which it has been created by non-biblical factors. When Levertov introduces the idea that Mary’s free will, courage, and consent should be central to how we understand this event, then, she’s already established that what we thought was true might be worth rethinking.

In fact, the entirety of Levertov’s reflection concerns the space between the angel’s “question” and Mary’s answer. Notably, Levertov’s poem resists the tendency to call the angel’s words an “announcement.” Despite the name of both the poem and the holy day, in Levertov’s reading of the scene, the angel does not announce Mary’s fate. Rather, “This was the moment no one speaks of,  / when she could still refuse.” It is Mary’s free will, her “consent, / courage unparalleled, / [that] opened her utterly.”

Levertov’s re-visioning of this scene which is so central to Catholic theology changed my relationship with Mary. Suddenly, I could see agency in Mary’s “yes.” She was not a meek and mild woman to whom this happened; she was strong and courageous, and she accepted God’s will, despite the pain and hardship and burden that came with it. She chose her life.

I don’t know why Levertov’s emphasis on Mary’s free will surprised me. After all, free will is not a concept she invented. The Catechism is clear that “God created man [and woman] a rational being, conferring on him [and her] the dignity of a person who can initiate and control his [or her] own actions…. Freedom is the power, rooted in reason and will, to act or not to act, to do this or that, and so to perform deliberate actions on one’s own responsibility. By free will one shapes one’s own life. Human freedom is a force for growth and maturity in truth and goodness; it attains its perfection when directed toward God, our beatitude.” (CCC 1730-1731).

Why, then, did I assume Mary lacked free will? Why did I assume that her life was dropped on her without choice? By illustrating Mary’s free will, Levertov emphasizes the power and beauty of her gift to us.

By illustrating Mary’s free will, Levertov emphasizes the power and beauty of her gift to us.

It’s not only free will that Levertov emphasizes in this poem though; she also emphasizes waiting, and waiting is, of course, central to the theology of Advent. By focusing on the space before Mary’s consent, Levertov invites us to pause: “A breath unbreathed, / Spirit, suspended, / waiting.” That we know going into the poem what her answer will be doesn’t change the intensity of the suspense; and isn’t this what Advent is? We know Christmas is coming. We know Christ will be born. (Catechism 524 calls this the “ancient expectancy of the Messiah.”) Yet we take four weeks to live in suspense, to wait, and to prepare our hearts. We “renew our ardent desire for his second coming.” (CCC 524)

Levertov’s illustration of Mary’s free will and consent, then, adds an extra layer to the intensity of Advent. When we recognize the pause before Mary’s acceptance, we recognize Mary’s great role in our own Advent. Spiritually and liturgically, Advent is our time to focus on our desire for Christ’s coming, but the desire only works in the knowledge of prior absence. We need to consider the time before Jesus was with us on Earth to fully understand the magnitude of Jesus with us now. Our preparations for Jesus’s birth, which we know, after all, both already happened and will happen again on Christmas, make no sense without our knowledge and spiritual memory of the time before. Advent doesn’t make sense unless we consider that future fulfillment implies a previous absence.

We could have no Christmas – and thus no Advent – if we didn’t first have Mary, bravely, courageously, strongly, willingly, consenting to the great challenge that God placed before her.

Theresa Woodhouse is married with three children and works part-time as a professor. She enjoys reading, writing, working out, and coffee (so much so that her family has told her she’s never allowed to give it up for Lent). She is writing under a pseudonym and chose the first name because every saint with a version of that name is awesome and the second name because, while she is not “handsome, clever, and rich” like Emma Woodhouse, Emma’s faults are a bit too familiar to her.