Open to Life, Open to Death: Love and Miscarriage 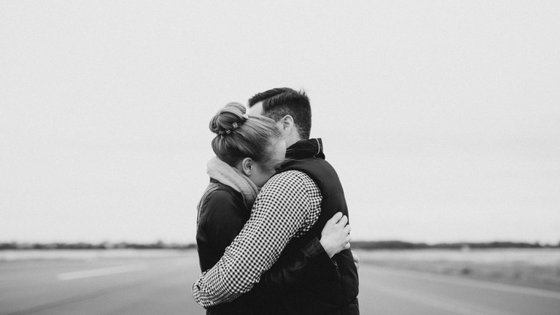 My husband and I were avoiding pregnancy after our wedding while we worked on an interstate move and settling into new jobs. But we were open to life, and looking forward to tangibly welcoming life by way of a squishy little bundle of baby chub in short order.

We were prepared for it to take time – I was diagnosed with PCOS in high school, and years of charting my cycles for health awareness revealed a litany of reproductive health concerns that hadn’t responded to treatment thus far. Cycle after cycle led to a week of extreme cramping and a glass or three of red wine while picking fights over Downton Abbey or the gender wage gap instead of gleefully researching how to raise a kid in an urban studio apartment. After a year, we weren’t alarmed by this, just resigned that my ovaries hadn’t magically healed themselves (surprise) and we would have to pursue fertility-specific medical intervention after all.

Six months later, a few days before leaving to visit family, I peed on – a lot – of sticks, not wanting to let myself believe that I really was seeing a second line.

That life had arrived.

And almost before the sticks dried, death followed. This baby wouldn’t be curls and kisses – he or she left me in the clumps of tissue my body expelled along with her life.

My mind was numb but my body was in torment. My husband didn’t know how to help me, and in trying to silence his own grief to shoulder mine, never let himself feel the loss. I was blinded by my own feelings of failure as a woman, wife, and mother, and my overwhelming, visceral pain when I let my brain even drift into the vicinity of the miscarriage. We were theology and sociology nerds who had thrown ourselves into marriage prep with Hermione-like abandon, and on an academic level knew that miscarriage was a distinct – even likely – possibility over the course of our life together. But we weren’t prepared for what that practically meant for our marriage, and that almost destroyed us.

we weren’t prepared for what that practically meant for our marriage, and that almost destroyed us.

We aren’t alone in that. In addition to earlier studies finding that women experiencing a miscarriage suffered increased instances of anxiety and depression, a 2010 study by Katherine Gold, M.D., M.S.W., M.S., research found that women who experienced miscarriages had a significantly greater hazard of their relationship ending, compared with women whose pregnancies ended in live births.

This is an alarming fact, particularly when up to 20 percent of all women who know they are pregnant face a pregnancy loss before 20 weeks. How, as Catholics, can we prepare engaged couples for the reality that in their attempts to be open to life, they may also be forced to embrace death? And for those of us who already know that bitter truth, what can we do to bring our marriages back from the brink?

A few things helped my husband and I, and I wish someone had told us about them before we needed it.

This seems obvious, but in the murky days following a loss, it’s easy to sink into silence. Neither of you want to bring up painful memories to the other person, or it feels like if you just don’t say anything, maybe the pain will go away on its own. It won’t. It only festers in the darkness. You may hold it together and limp along for a time, but eventually something will touch the wound. The grief and anger you’ve held back will erupt, and suddenly a fight that started over dirty laundry will end in you packing a bag.

Priests are amazing human beings, and by all means, let your pastor know what’s going on and how he can pray for you. Pastoral care is important, and he may be able to point you towards resources in your parish for grieving parents. But guiding you and your spouse through miscarriage recovery is a job for a mental health professional. It’s almost guaranteed that your response to loss will have revealed other areas in your marriage that could use some help.

Talking about our child is still tender. But we keep taking deep breaths and naming our whole family in our prayers, and we’re planning a small remembrance token. Losing a child doesn’t get easier, but talking does. And the more you’re able to open to your spouse, the better you know how to support each other going forward.

4. Prepare for the possibility.

For couples still preparing for marriage, you’re probably neck-deep in your diocese’s marriage prep requirements. In your discussions about fertility and family planning, make sure you also bring up the possibility of miscarriage and still-birth. Nobody wants to think about these things, but beginning the conversation proactively can help you take the steps you need to help your marriage if heartache comes to your door.

The first anniversary of our loss is coming up soon, and we haven’t conceived since. This may be the only child we have the privilege to parent, and how do you parent someone who’s already a saint? Being open to life doesn’t guarantee any of us a right to a living child as some kind of Heavenly reward. It means just that – being open, and accepting what comes. For us that’s been loss. But by the grace of God, the help of a professional, and likely the prayers of our child in Heaven, our marriage doesn’t have to be collateral damage.