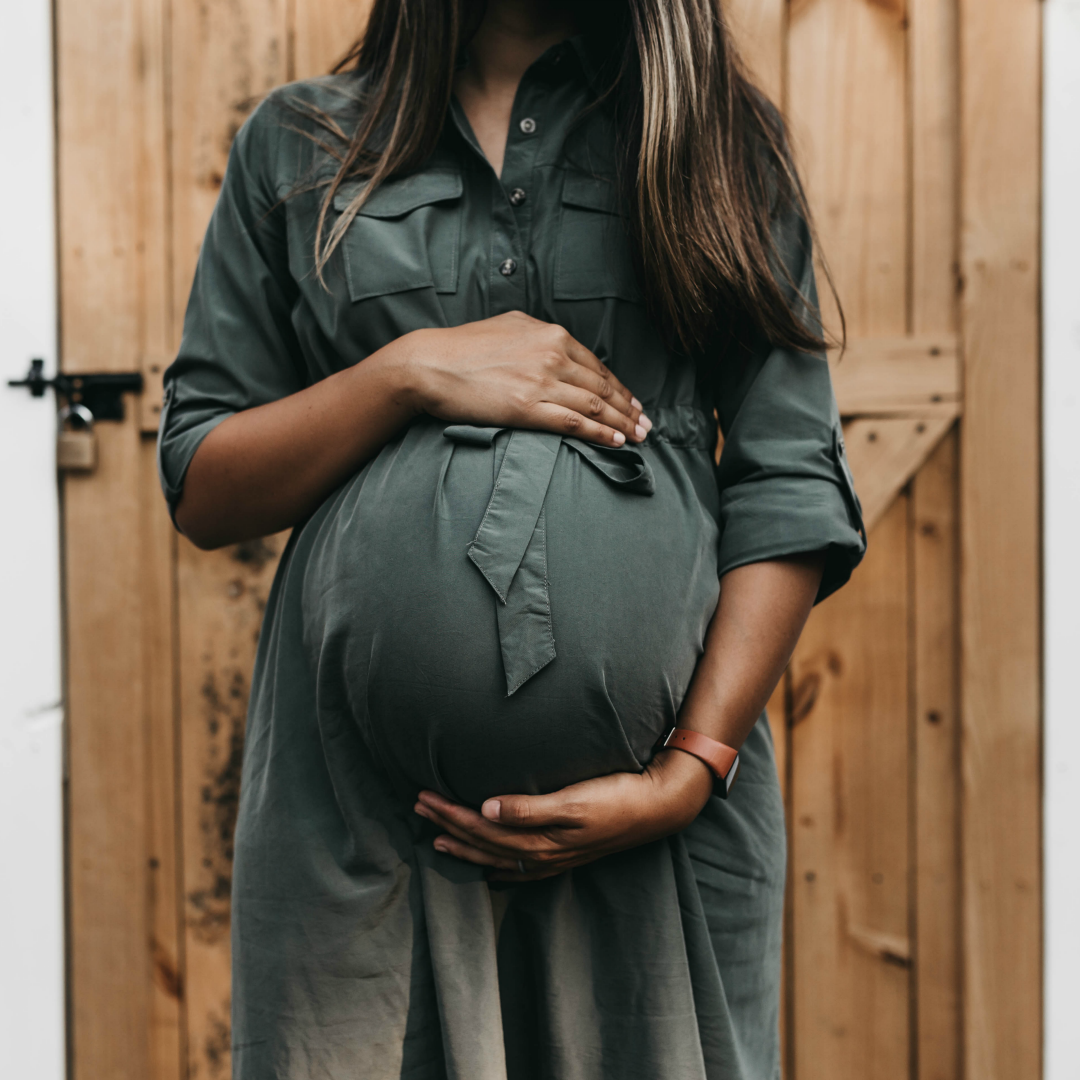 On a September morning, clutching three positive pregnancy tests, I googled “patron saint of pregnancy” in search of a saintly companion.

Even more surprising to me, it was a man whose connection to pregnant women was that his mother had died in childbirth.

In that moment, my heart fell. The first saintly friend presented to me was someone whose story, at first glance, reinforced the cultural narrative that a good or Godly mother is a mother who literally died for her child. I searched for companionship and solidarity on this thrilling and terrifying journey of pregnancy; what I found, instead, was a narrative of sacrifice and death. I hoped for a model of pregnancy as part of a path to holiness, but I was presented with an intercessor who never walked that path. A sense of shame washed over me, stemming from the fleeting thought that I wasn’t living up to the standard of a saintly mother because I hadn’t given my life for my child. And then, I felt left out. Was this the only patron for pregnant women out there?

Fortunately, no — as I dug, I met several intercessors who can accompany and pray for women during their pregnancies.

Patrons Who Intercede for Pregnant Women

Patron saints do two things: they intercede for us, and they model for us different paths to holiness.

Having men — or, more broadly, anyone who didn’t experience pregnancy — as intercessors makes intuitive sense. After all, you don’t have to experience something in order to be a powerful intercessor for that thing. Consider St. Therese of Lisieux, who is a patron for missionaries (despite never having gone on a mission) because she had a heart for praying for those who were out in the field. The strength of someone’s prayer does not rely upon his or her lived experience.

Examples of strong intercession for pregnant women abound. Consider St. Colette, a 14th-century French nun whose friend’s wife credited her intercession during a dangerous childbirth for saving her life and the baby’s. Later, a peasant couple who experienced a stillbirth brought the child’s body to their priest, who refused to baptize the child because death had already occurred. Distraught, the couple brought the child to St. Colette, who wrapped the body in her veil and sent the couple back to the priest. When they arrived, the child was alive and well. Because of these two events, St. Colette is often noted as a patron saint of pregnant women and women in childbirth.

If you’re looking for other holy friends who are known for interceding for pregnant women, check out St. Catherine of Siena, St. Catherine of Sweden, St. Agnes, St. Gerard Majella, or St. Raymond Nonnatus (Google’s preferred patron of pregnancy). Furthermore, take this opportunity to pause and reflect on the fact that you could become a patron of something you never experienced. Think of how powerful your intercession must be, or how deeply you would care about something that was outside yourself, to become known as the patron of something foreign to you. And, in fact, some holy men are particularly connected to pregnant women because their causes for canonization involve Vatican-certified medical miracles that helped pregnant women: St. Pope Paul VI, St. John Henry Newman, St. Oscar Romero, Bl. Michael McGivney, Venerable Fulton Sheen, and many more.

When I was searching for patrons for pregnancy, my research repeatedly led me to saints (usually men) whose stories emphasized intercession — but I had hoped to find a friend who understood the daily trials of pregnancy as part of her path to holiness. Where were the patrons who had walked in my slightly-bigger-to-accomodate-swollen-feet, pregnant shoes?

This disjuncture highlighted how history has shaped the models that the Church (and Google) presents to us. There are a few ways in which this history impacts which models of pregnancy are available for Catholic women. First, the vast majority of saints, particularly before Pope St. John Paul II, were men, which limits our options. Women have been studied and written about less, leaving their stories untold and their memories forgotten. Furthermore, while the Pope occasionally declares a saint to be a patron of a particular group, place, or thing, choices of patrons usually arise from years of intercession and devotion from us, the people. Since so many of our cultures have assumed men’s religious superiority, it’s unsurprising that a lot of the grassroots patrons (including those of pregnancy) are men. Additionally, when the Church has focused on canonizing women, it’s often nuns and sisters whose causes have been prioritized, leaving very few pregnant women in the mix. All of these factors come together to result in a patron saint pool that is slanted toward intercessors and leaves pregnant Catholic women still searching when it comes to models.

Whether you are presently clutching positive pregnancy tests like I was, praying for a long-awaited child, or interceding on behalf of a pregnant woman, you may be searching for someone who can relate to the experiences of fatigue, concern, and (in my case, at least) endless vomiting. I want you to know that you have plenty of options for saintly friends. Here are just a few.

You are not alone. Blessed Maria Quattrocchi, an Italian professor at the turn of the 20th Century, understands. Upon finding out she was pregnant for the second time, she wrote, “To endure the physical and physiological exhaustion of pregnancy and the rest? Believe me, I am truly in despair.” After giving birth, she wrote again, “I’d prefer anything to another pregnancy.”

Praying for courage in the face of trials?

Consider St. Felicity, a 2nd-century woman enslaved in Carthage, Africa. She was pregnant when she was imprisoned and sentenced to death for being a Christian. Since the law forbade the execution of pregnant women, her execution was delayed until after shortly after she gave birth. Similarly, St. Margaret Clitherow, an English woman in the 16th century, was martyred while pregnant with her fourth child.

If you are under stress while pregnant or postpartum, or are beaten down by legal structures (for example, searching for ways to afford a maternity leave or trying to convince an unhelpful medical provider to listen to your concerns), befriend Sts. Felicity and Margaret.

Doing this (mostly) on your own?

In her third trimester of her third pregnancy, St. Elizabeth of Hungary (13th century) learned that her husband had died. St. Helen (of third-century Italy) and her son were abandoned by her husband, who left them for a younger woman. In the fourth century, in what is now Algeria, St. Monica’s husband was around during her pregnancy and birth, but he was an abuser and alcohol addict. Mary, the mother of God, faced the prospect of St. Joseph leaving her when he discovered that she was pregnant.

No matter why you feel alone or lonely in pregnancy, there is a saint who has walked that path and experienced that pain.

Planning to find an adoptive family for your baby?

St. Jochebed (Exodus 2) gave her child, Moses, the best life she could by putting him in a basket so he would drift near the Pharaoh's daughter. St. Felicity’s fellow martyr, St. Perpetua, placed her own infant in the care of her mother and brother.

St. Mary Yi Seong-rye, a Korean mother in the 19th century, was imprisoned for being a Christian. As she watched her infant waste away in the jail, her commitment to the faith wavered, and she apostatized. But soon after, she regretted the decision. She found a home for her infant and her other children and pronounced her faith again, leading to her reimprisonment and eventual martyrdom.

St. Marie of the Incarnation, a 19-year-old 17th-century French widow, entrusted her young son to her relative’s care so she could join a convent.

Worrying about your baby’s health?

St. Gianna Beretta Molla, a 20th-century Italian pediatrician, experienced two miscarriages and had a tumultuous final pregnancy, during which her child’s life was in danger because of a uterine tumor.

Worrying about your health?

St. Gianna is a wonderful companion if you are worried about your own health, as well. While her own untimely death occurred after contracting an infection postpartum, she has continued to intercede for women and their children. The two miracles leading to her beatification and canonization were instances where her intercession saved a mother’s life and a child’s life, respectively.

Recall Bl. Maria Quattrocchi, who was so exhausted during each of her pregnancies that she could never imagine having another child.

Hoping for saintly friends who became moms later in life?

Interceding for a friend?

Consider St. Bridget of Sweden, a 14th-century noblewoman who had eight children, including St. Catherine of Sweden. This mother-daughter duo counseled friends and community members who were pregnant or had experienced miscarriage.

Turn also to St. Hedwig, a 13th-century princess and duchess in Poland and surrounding areas (and aunt of St. Elizabeth of Hungary). St. Hedwig had seven children, only two of whom survived into adulthood. She became a nun after her husband died, but before that, she spent her political capital caring for orphans and expectant women around her.

I asked my intercessor friends, men and women alike, for help countless times throughout my pregnancies. I also found saintly friends whose lived experiences of pregnancy offered me hope and solidarity during my own journey.

If you are looking for an intercessor, you have a multitude of heavenly options. And if you’re looking for a model, consider befriending one of the 20 women in this article who experienced pregnancy and became saints. Either way, please remember: You’re not alone. You have countless saintly friends — men and women, people who have been pregnant and people who haven’t — at your side.

All you holy women and men, pray for us.

Special thanks to Katie Pyles, Fr. Brian Ching, C.S.C., Dr. Kathleen Cummings, and Stephanie Bona for their help in researching and writing this article. 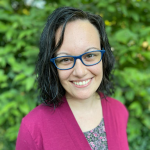 ‍Abby Jorgensen is a firm believer in the dignity of the human person and strives to enact this in her roles as wife, mom, sociologist, and birth and bereavement doula. In her work as a Ph.D. candidate at the University of Notre Dame, Abby works to apply her charisms of knowledge and teaching to align academic understandings of family, politics, and culture with people’s lived experiences. She aims to foster a loving politic based on dignity and the pursuit of truth. In both her academic and doula work, she is on a mission to accompany parents and future parents navigate parenthood. Abby lives on a little city lot in South Bend, Indiana, with her husband, daughter, two dogs, cat, and five chickens. She once designed and taught a course about cultural sociology using Star Trek. 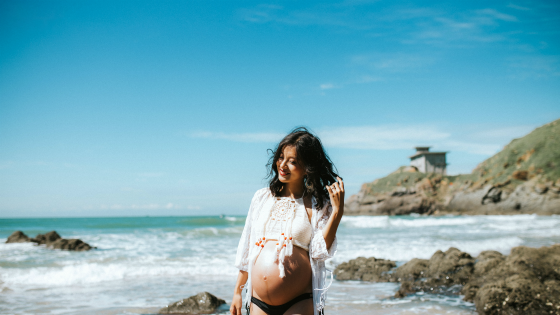 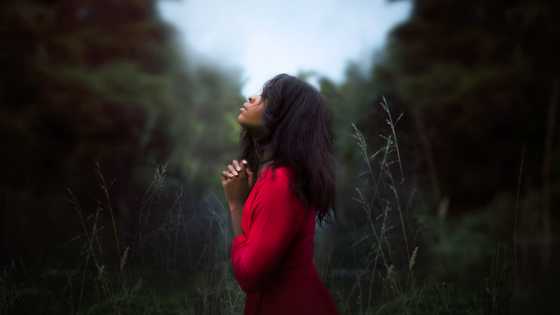 When Women Pray (Part I): The Necessity of Prayer