Shopping in blissful ignorance: A spotlight on Fast Fashion 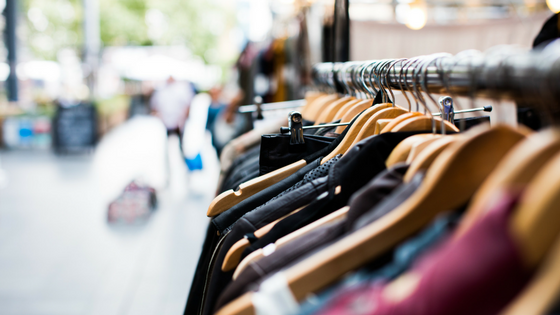 I first heard the term “fast fashion” two years ago.

I took in the scene immediately: the quickly changing trends, the insatiable consumerism, the disregard for waste, the rock-bottom prices and consequent rock-bottom wages.

The phrase itself validated my lifelong sense of being a step behind the fashion curve.  By the time I pondered a new trend long enough to decide whether I liked it, then decided whether it was worth a purchase, and THEN got around to actually shopping – the trend was stale, more often than not.

The phrase also convicted.  How often have I bought an item, only to barely use it or find I didn’t like it as much when I got home?

I knew in a vague sense about the connection between fast fashion, sweatshops, and garment workers’ rights.  I could name a brand or two that claimed to be ethically made.

But I was horrified to learn what I hadn’t known.

The global fashion industry is a $3 trillion industry that largely relies on cheap female labor.  Over 80% of garment workers are female, age 18-35.  These women often support their own small children or their elderly parents.

They earn $2 USD a day on average, far below what would be considered a living wage for their country.   This average includes forced unpaid labor in Uzbekistan cotton fields.

Their working conditions are often unsafe – sometimes deadly so.

For a dress I don’t really need?  For the thrill of an unexpected find on sale?  For a new pair of tennis shoes or heels?

I know the equation is not as simple as this and the problem extends well beyond my own personal decisions or even the cumulative effect of millions of consumers’ decisions.

Still, I began looking for answers as to my responsibility – and my culpability – as a consumer.

I remembered my moral dilemma years before when I had come across a list of companies that donate to Planned Parenthood.  I scanned the list and grew despondent; it was obvious that I could not live in modern America and avoid buying from companies that supported abortion rights or other objectionable-to-me causes.  I decided that this was a symptom of living in a fallen world.  Moreover, the cooperation between my purchase of a laptop or a new book and that company’s choice of where they donated was so remote as to render me, the consumer, not culpable in the least.

And yet, the issue here -- where my purchase of a new shirt perpetuates demand and allows the company to continue to exploit the women who create that shirt -- seemed different in kind.

And yet, the issue here -- where my purchase of a new shirt perpetuates demand and allows the company to continue to exploit the women who create that shirt -- seemed different in kind.

By knowingly purchasing clothing or shoes from companies who profit from the desperate oppression and poverty of their employees, I am participating in a system that maintains a status quo of despair for some of the world’s most vulnerable.

True, I do not intend this evil, and I do need clothes to wear.

So, what is a Catholic woman with a heart for the poor but a limited budget to do?

I began to search for what insight I could find in the Church’s many documents about social justice issues and moral theology.  Much has been written about the rights of workers, the duties of employers, and the responsibility of governments in the economy.

But what about me, as a consumer?  What is my responsibility to these other women who produce my clothing? What is required of me?

I turned first to the 1891 encyclical Rerum Novarum, “On Capital and Labor,” by Pope Leo XIII.

He writes: “A most strict account must be given to the Supreme Judge for all we possess” (RV 22).

Ouch.  I think of my house full of… stuff.  So much stuff.

Pope Leo XIII continues: “When what necessity demands has been supplied, and one’s standing fairly taken thought for, it becomes a duty to give to the indigent out of what remains over.” (RV 22)

We have a duty foremost to care for our families and provide for our basic needs out of our resources.   For many, this task requires careful attention to budgets,  creativity, good fortune, and much prayer.

For others, however, there is room for discretionary spending.

It seems to me that this spending – after I have accounted for the basic needs and well-being of my family – is where I would need proportionately greater reasons to purchase items knowingly from companies who exploit their workers.

Pope Benedict XVI had similar words for consumers in his 2009 encyclical Caritas in Veritate, or “Charity in Truth.”

“It is good for people to realize that purchasing is always a moral – and not simply economic – act.  Hence the consumer has a specific social responsibility, which goes hand-in-hand with the social responsibility of the enterprise.  Consumers should be continually educated regarding their daily role, which can be exercised with respect for moral principles without diminishing the intrinsic economic rationality of the act of purchasing.”

The purchases we make are by nature economic and often eminently practical, but they are also necessarily moral.  By this I don’t understand Pope Benedict to mean that the only acceptable answer in this instance is to buy fair trade clothing exclusively, as if there is only one moral solution.  Rather, I think he means that indifference to the plight of others when purchasing our clothing is not acceptable for us as Christian consumers.

It is tempting to say that an individual consumer will not change the ugly, unseen reality of our clothing’s origins in the global fashion industry.  Perhaps this is true.  There is much work to be done on behalf of the millions of garment workers.  Perhaps it is true that my personal efforts to root out materialism and indifference in my heart won’t effect change in the global market.  Maybe it won’t matter in the least.

But it matters to me.

I begin with a prayer that I may not be blind or indifferent to the suffering of others.

I begin with a prayer that I may not be blind or indifferent to the suffering of others.

Then I forge ahead into the new-to-me world of fair trade fashion and advocacy, while keeping an eye on budget with thrift stores and embracing less.

But that will be a topic for a future post.

Andrea Pfarr and her husband travel the country and globe -- subject to the needs of the U.S. Air Force -- with their three wild-hearted children and a little brown dog. Andrea delights in well-reasoned arguments, the universality of the Church, introducing their children to tales of epic adventure, and a mug of hot chocolate.