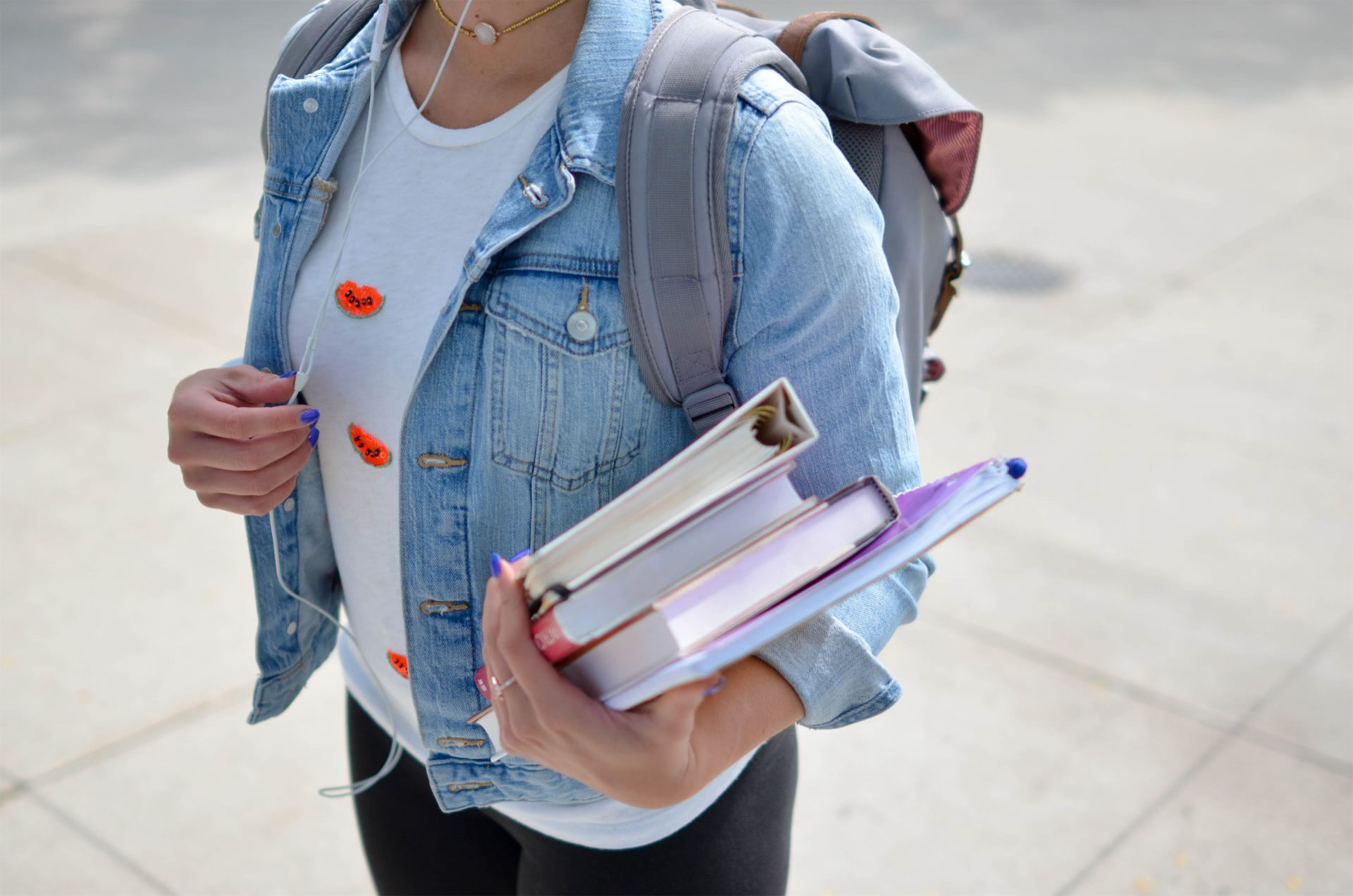 While COVID brought a lot of changes and challenges to this school year, it will still be counted among my favorites because it’s the year that I got to teach my dream class. I created an elective for the seniors at my all girls’ high school on the vocation and theology of women. It’s the class that I wish I had in high school. It’s the class that covered the things I never formally learned in either of my theology degree programs. It’s the product of my own research and learning and belonging in communities such as FemCatholic.

After three years of pitching it, enough students finally showed an interest and so, this past January, we embarked on the journey together. After seven years of teaching from an established curriculum and framework, I had to come up with the objectives, benchmarks, readings, and topics to cover. I warned them at the beginning of the semester that the idea for this class lived in my head and would unfold as we went along. They were genuinely excited to be treading with me into these new waters.

I divided the course into three units: the true (theology), the good (social justice issues), and the beautiful (women’s gifts and leadership). Our main text was Pope St. John Paul II’s apostolic letter Mulieris Dignitatem (On the Dignity and Vocation of Women) and, most of the time, the course was driven by their questions and contributions to discussions.

Here are 3 things I learned from teaching this course and from my students.

1. Read what the Church actually teaches.

As with many topics, there is the impression of what the Church teaches, and then there is what the Church actually teaches. Like many people, my students came in with a view of an outdated, at best, and misogynistic, at worst, institution that thinks that women are second class citizens who are supposed to sit quietly and have all the babies. A few mentioned that they were ready to spend the whole semester arguing with me about all the ways that the Church was wrong about women and was holding them back.

In response, we spent the whole first quarter (8 weeks) reading through Mulieris Dignitatem, slowly working our way through it section by section. Their favorite part? The section about the treatment of women in the Bible. We talked about the awesome women who helped move salvation history forward in the Old Testament, such as Ruth, Judith, and Esther. We worked our way through the Gospel passages in which Jesus interacts with women, and we discussed his radical treatment of them for his day. We talked about Mary’s role in the Church and how it looks more like the medieval icons of her punching the devil in the face than it does the silent, pious woman holding her hands in prayer (although she does lead us in prayer). They were surprised to find a tradition that held women in vital roles throughout salvation history.

[My students] were surprised to find a tradition that held women in vital roles throughout salvation history.

Having this background in mind made the hard teachings easier to discuss. When we read an essay by Sr. Sara Butler on the all-male priesthood, my students’ previous work discussing the Gospels came in handy when talking about Jesus establishing an all-male priesthood. It was easier to understand in light of knowing how Jesus loved, empowered, and trusted women with so many other tasks. He made them prophets of the Resurrection, but not ordained priests. It was easier for them to process this mystery after having worked their way through what the Church actually believes and teaches about women, their role, and their equality in dignity.

2. The importance of active and empathetic listening.

In a world in which people are so quick to cut someone off so they can insert their own opinion, holding a space for real dialogue is essential. When it came to hard or controversial topics like maternity as part of the feminine genius, birth control, and modesty and purity culture, my students wanted a space to share their bad experiences hearing about these topics and to have someone truly listen to their concerns.

One goal within our department is to create a space for our students to know that they can ask their questions, bring up their disagreements, and wrestle with Church teaching. Our hope is for them to know that part of the process of growing in faith is questioning and wrestling with doubt. The world sells a version of feminism that pits it against the Church; either you’re a feminist or you’re religious. Our other senior course is on the relationship between faith and science, which also tries to dismantle the false dichotomy that pits science and reason against faith. The way to do this is to create an environment in which students feel comfortable with their struggles, doubts, and questions.

Our hope is for [students] to know that part of the process of growing in faith is questioning and wrestling with doubt.

Having a representative of Church teaching (in this case, their teacher) actively listen and take their thoughts, concerns, and questions seriously, allows them to recognize that there are a myriad of ways in which their personal beliefs about women actually align with Church teaching and that they can reconcile the two in their personal feminism. The best part of this approach has been giving them the tools, resources, and space for discussion so that they think critically along the way to this reconciliation.

3. The importance of diversity.

These students are coming of age during a time that is constantly calling for social change. They get that social justice work is important and that there is a clear need to fight for all human dignity to be respected. However, a lot of their understanding has trickled down through social media activists rather than the Church teaching. Many of their questions and points of disagreement usually came from a place of intersectionality. They want to be able to talk about the particular struggles of women of color or of lower socioeconomic status, and how their challenges go beyond just being women. They recognize the problem with viewing things through an exclusively white feminist lens and they hunger for a feminism that represents all women. We looked at every social justice issue in our course from an intersectional lens and constantly came back to the goal of Catholic Social Teaching: Working to create a world in which every person’s dignity is respected and all people have the ability to flourish. Emphasizing that their concerns are Catholic concerns helped them begin to reconcile their personal feminism and activism with the call to build the Kingdom of God on Earth according to the Gospel.

One of their assignments was to lead prayer by presenting on a female saint. During the first round, I assigned them the saints mentioned by Meg Hunter-Kilmer in her FemCatholic Conference talk entitled “The Wild Diversity of Catholic Femininity.” The goal was to introduce them to the rich diversity of the feminine genius in the lives of women whose holiness can’t be argued.

In the beginning, the terms “feminine genius” or “true femininity” meant something particular to my students: it was a specific box that many of them didn’t feel like they fit into. Their presentations allowed them to see that there is no box or checklist for the perfect Catholic woman. To live out the feminine genius is ultimately for them to be their authentic selves as they use their gifts to live out the call God has them for. As a Church, we must do better in presenting this “wild diversity” to give young women a model of what their seat at the table can look like, as unconventional as it may seem.

[Students'] presentations [on diverse saints] allowed them to see that there is no box or checklist for the perfect Catholic woman.

Overall, the class went well. As it always goes, we didn’t get to cover everything or go into as much depth as I would have liked to. The most important lesson that I learned is the need for this class. Girls and young women want to learn more themselves and to share this information with others. They want people to know that there is compatibility between Catholicism and women’s issues. They want to share the true Jesus who loves women and the Church who is called to support women, albeit as a continued work in progress. A fire has been lit in them - and they want to take it into the world and set it ablaze.

My students dug into an understanding of what a genuine Catholic feminism can look like in the face of the countless versions that they will receive as they head into college. They’ve been given the tools to examine the world more critically and hopefully to bring about true justice, one that elevates, supports, and advances women as women. My hope is that they hear the words of Christ in Mark 5:41 as a call to action: “Talitha koum [...] Little girl, I say to you, arise!”